A physics excursion in the university of cologne

Who knows whether one of our Studienkolleg students would become a physicist in the future, and who knows if he or she was inspired by this excursion? On 20. September, guided by Studienkolleg’s physics lecturer Mrs. Lindt-Krieg, students of M (medicine) and T (technical science) courses had three very interesting experiments in the Physics Faculty of the University of Cologne. The experiments were: refraction of a light through a glass hemisphere, and magnetic field of the earth as well as the specific charge of electron. 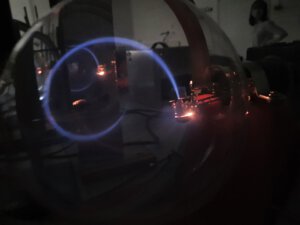 For hygienic reasons each group did not exceed 4 students. Our students took their seats around the tables, observed the instruments, and could not wait to start. They concentrated on the experiments and it was great to see the formulas and theories from textbooks come to life in practice.

Our lecturer asked students to observe the angle of a beam light refracted after passing through the glass hemisphere, and calculate the average value of the angle according to the formula. Students divided their tasks: one adjusted the distance, one measured data and one read data and recorded.

Another group of students was observing the force of the magnetic field generated by the coil on the pendulum to check how it influences its oscillation.

The third group was calculating the specific charge of electrons with a Teltron tube in the dark. The electric ray sometimes formed a circle and sometimes formed a spiral, depending on the position of the magnetic field to its entry point. Students all exclaimed.

After completing one set of experiments, they began to switch places. One student from the previous group explained the experiment to the students of the next group. 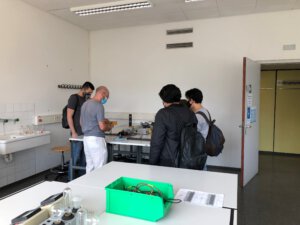 Our lecturer calculated on the blackboard.

Students from Studienkolleg spent a very meaningful afternoon at the University of Cologne. Physics experiment was like a treasure hunt game. Students were immersed in it, and applied what they have learned. 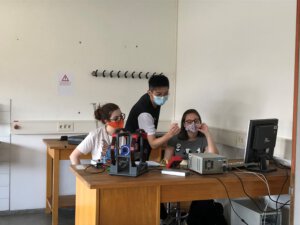